Human Aided Music is a Human-Machine percussion duo where the machine learns from the human. It proposes a fluid dialogue between both, to the point where no one distinguishes who leads the music.

It is a robotic sculpture, called Bernard, equipped with an artificial intelligence program capable of musically accompanying a human interpreter. 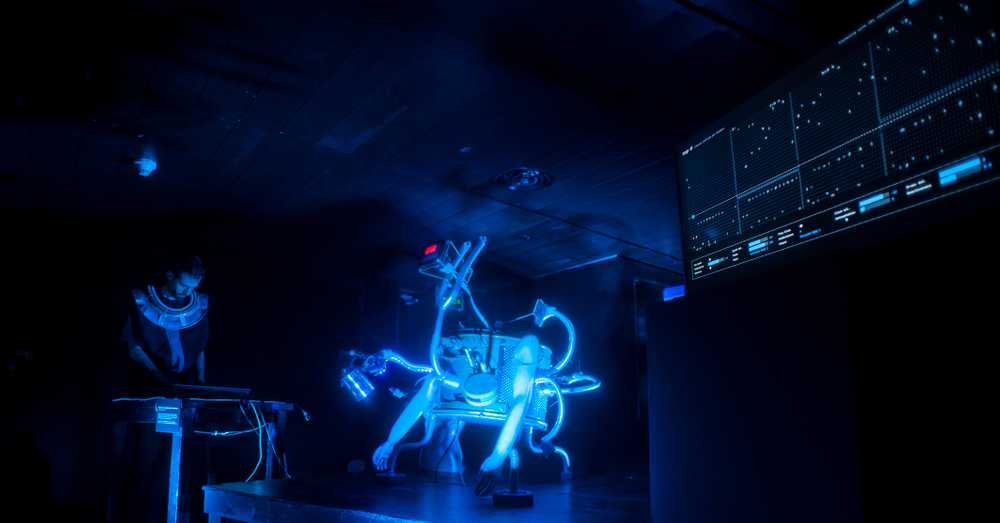 The work speaks about the creation of artificial life from an artistic perspective, wondering whether a funky-drummer-machine that can hold a musical conversation with a person could be credible spectacle. Credible not in the sense of deception, but in the sense of recognizing the human trace in the machine.

Would the spectator come to feel that in the machine, although in a rudimentary way, there is life?

The creation of life always associated with horror: will we create monsters? will the machines replace us? But associated also with the greatest desires of the human being: the search for immortality and the breaking of all limits.

We are still talking about funky-drumming … but if we manage to transfer the skills of a drummer to an artificial intelligence program, what could we not, potentially?

Presentation at the San Martín Cultural Center, within Noviembre Electrónico 2019.
The work was selected for the SM2 art-science residency program.

Presentation at the National University of San Martín, in December 2018.
The AI side of the project was still in development. But I was anxious to give it a try so here I’m livecoding the machine along with some synths.

The aesthetic proposal is to humanize the machine and “machinize” the human with the intention that this crossing will provoke the feeling of approach between them. Elements normally associated with the human are transferred to the machine and vice versa.

While the machine strikes acoustic percussive bodies with electromagnetic actuators, the human have digital gear with synthetic sounds. The title also plays with this aesthetic cross: the term computer-aided music has been known for years, in which the human composer uses the machine to solve technical and high precision tasks in order to carry out his work. Here we propose the opposite: it is the machine who “composes”, but needs the assistance of a human to inject emotion into his work.

Bernard has a machine-animal-humanoid hybrid aspect and all the signs of the imperfect and unfinishedness: lack of symmetry, fragments of different technologies and materials, and evidence of recent repairs.

A unique creature rather than a device. A clear trace of having been sired.