The work was presented at the concert given at the Galileo Galilei Planetarium in the City of Buenos Aires in November 2016 as part of the Noviembre Electrónico.

Opensemble is also the name of a framework for collaborative algorithmic music. It employs the software engineering techniques used by the Open Source development model to discover the music that this kind of distributed and large scale collaboration can offer.

The goal of L.H.C.V.M.M. was to translate the data generated by the ATLAS detector , one of the four major LHC experiments, into stimuli for the musical composition and performance.

Collaborators register functions that implement sonically sound units matching certain spectromorphologic vocabulary terms by calling a method on the framework. Those functions receive a sound unit object as argument allowing collaborators to use its properties on their implementation.

Finally, the framework selects the most suitable registered function for each received OSC message and pass the sound unit object to the selected function. This selection is done based on the best match of vocabulary terms of function descriptions and sound unit object properties.

The work became a paper presented to the Internacional Computer Music Association at ICMC2016.

The following diagram can help to understand the data flow. For deeper details about the project, download the paper or dig into the project repository 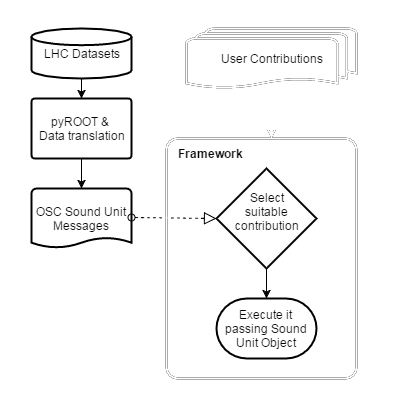